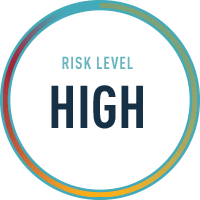 Western bean cutworm moth populations continue to increase in the usual “hot spot” regions for this particular insect, and with a higher percentage of the host crops now reaching into critical growth stages, an increase in both risk levels and spatial coverage of risk areas is in the forecast for the next week. Of greatest concern is in far northern Kansas and much of southern Nebraska where moth captures are expected to be the most widespread and highest, and where subsequent egg laying activities may occur. High risks have been introduced to the forecast in this region. Moderate risks surround the High risk area in these same states, with Low risks extending from far western Nebraska and eastern Colorado east to near the Missouri River. Additional Moderate risks are found from northern Indiana and northern Ohio into southern lower Michigan and southern Ontario, Canada where moth activity is likely to increase but on a more scattered basis. Low risks extend from Wisconsin east across much of the Great Lakes region not included in the Moderate risk. Growers in or near these risk areas are encouraged to scout fields closely as the treatment window for this particular insect is fairly narrow, and properly-timed treatments are important to controlling potential damage/yield loss.